It was a month ago that we left a small city called Artvin in the east of Turkey on our way to the Black Sea. We left Artvin after lunch, slow to organise ourselves after two nights in a hotel, and had a bit of a shock as there was a fierce headwind. The road wasn’t too busy though there were a few tunnels. Then we hit brand new tarmac which was a bit of a novelty. Due to the steep sides of the valley we camped “wild” a bit too close to a village and were disturbed all night. 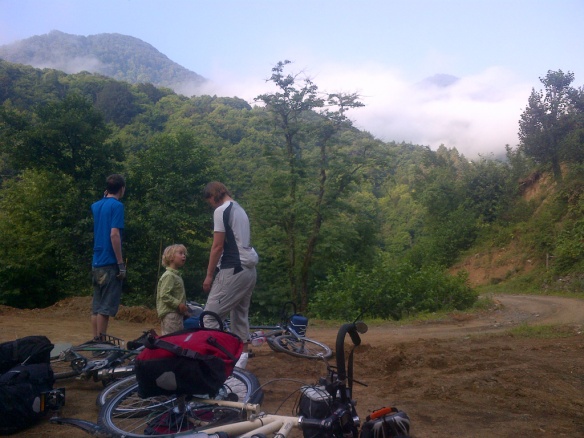 We had a massive climb before we reached the top of the pass on the second day of cycling, and then we found ourselves moving from the drier rockier interior to the lush green humid Black Sea coast with the most marvellous decent – in about 10 minutes we had gone down most of the 650 metres. We reached Hopa and as we had expected were disappointed with the coastline – man-made sea walls with no sign of beaches, and no obvious redeeming features of the town although my guidebook had called it a “pleasant coastal resort”!

At the bus station we considered our options. Ideally we wanted a bus back the way we had come and then on to Ardahan so we could continue cycling to Kars. However there were only minibuses on this route and fitting the bikes in would be a problem. There were plenty of large coaches going elsewhere, including Istanbul, and after some deliberation we decided we had seen enough Turkish mountains for now and would head for the city.

We stayed at the Orient International Hostel, and met three other cycle tourists, one from the UK on his way to Australia, the others from France and Germany, both going around the world. Istanbul is large but easy to get around either on bikes or public transport. We did some sightseeing and shopping for bicycle parts while trying to hide from the heat in the middle of the day. Tilly and I enjoyed exploring the Grand Bazaar and riding the tram. 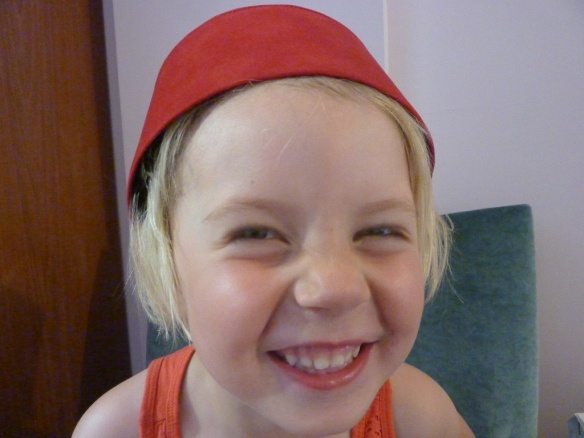 Jack bought a Fez at the Grand Bazaar

We tried to find cheap food (shocked by the prices compared to eastern Turkey!) and my favourite so far is the savoury pastries while Brad likes the Turkish delight. Jack and Tilly wanted hot chips but everywhere (except the Western fast food chains) serves them cold! 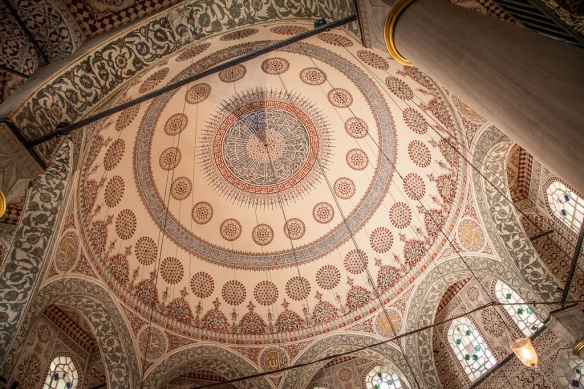 Mausoleum at the Haghia Sophia 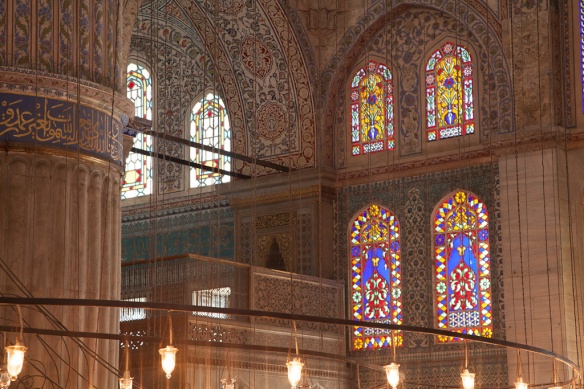 Inside the Blue Mosque

Jack decided to head home, and after putting him on his plane we set out to the bus station to see where we could go in search of beaches! We had to try three bus companies before we found one, Metro, who would take the bikes (for an extra fee on the way out though we managed not to pay extra on the way back) to Çannakale, the city on the Dardanelles which is the gateway to Gallipoli for so many tourists. 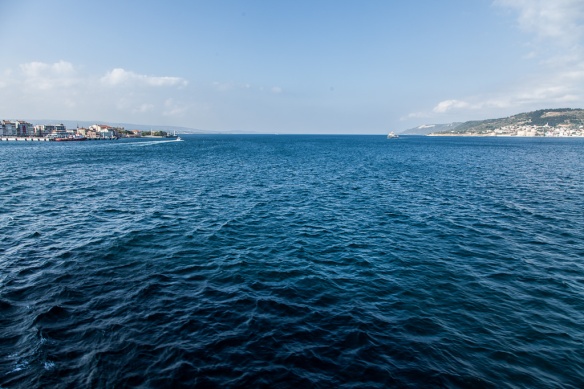 After a night bus journey it was dawn when we set off from the Çannakale bus station and cycled to the ferry which took us a short hop across the Sea of Marmara at it’s narrowest point. We cycled to the other side of the Gallipoli Peninsula and found a campsite at Kabatepe where we stayed for 3 nights. The campsite was in a pine forest next to a sandy beach with clear blue water. It should have been a fabulous location but unfortunately the Turkish people do not pick up their litter at all. The campsite and beach were covered in paper and plastic rubbish and the toilet/shower block was never cleaned. 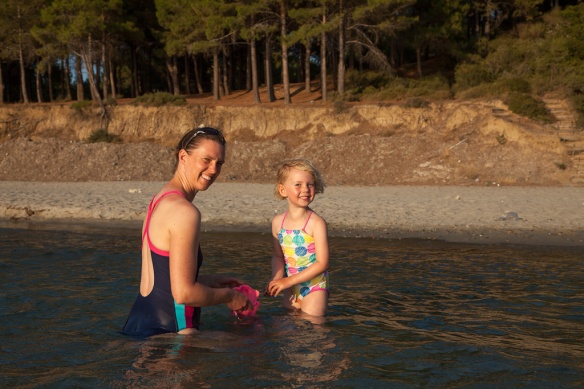 A rubbish dump on top of a windy hill…

Our neighbours were very friendly and gave us Turkish tea and coffee, watermelon and bread. They were primary school teachers and for 10 years have spent every summer at the campsite. They told us that the school children have 3 months off over the summer which explains why we haven’t noticed any schools since we arrived in Turkey. 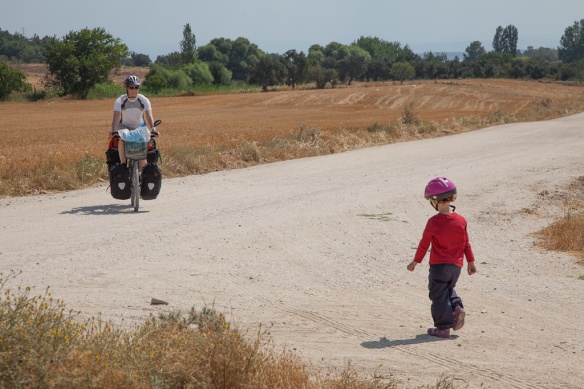 We visited the Çannakale Museum and learned the Turkish side of the WWI story (very much steeped in propaganda though) and cycled to Anzac Cove and visited just one of the many Commonwealth cemeteries.

Tired of all the rubbish we had one last lovely swim in the Aegean sea and headed back to the southern side of the peninsula and found our best wild camping spot yet. We had views of the ships passing through the Dardanelles, were disturbed by no-one except the local cowherd who welcomed us warmly and profusely in Turkish, offering us water, bread, and other things that we couldn’t understand.

Ships passing in the night, The Dardanelles

We forced ourselves to leave early in the morning and do a proper days cycling, to go and visit the British WWI memorial at Helles Point, at the very tip of the peninsula. We ended up cycling 70km that day, which is the most we have ever done on our fully loaded touring bikes. 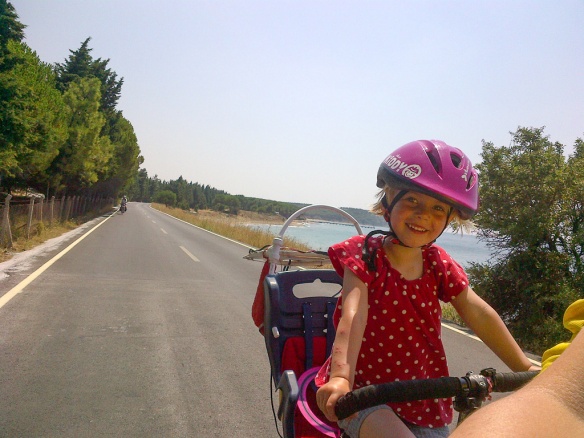 Tilly was in her element, to tired to pedal but keen that we were always on the move. We stopped for icecream and pop and to cook some pasta but otherwise kept on the move the whole day. 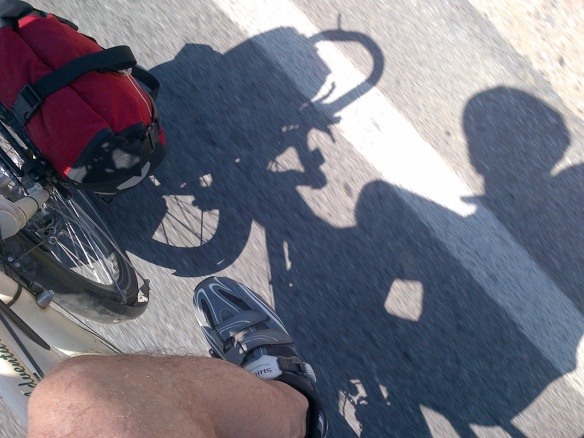 We crossed back to Çannakale on the ferry and then waited for the evening bus back to Istanbul. This time Brad split the tandem in half to ensure no arguments about carrying the bikes with the bus driver.

We arrived in Istanbul at dawn and cycled 25km to find breakfast and our hostel. With yesterdays cycling that makes 95km in less than 24hrs. Now we are relaxing with air conditioning, which is much appreciated after camping in the heat. We have a few days to shop for bike spare parts, clean our filthy clothes and prepare to arrive in India. 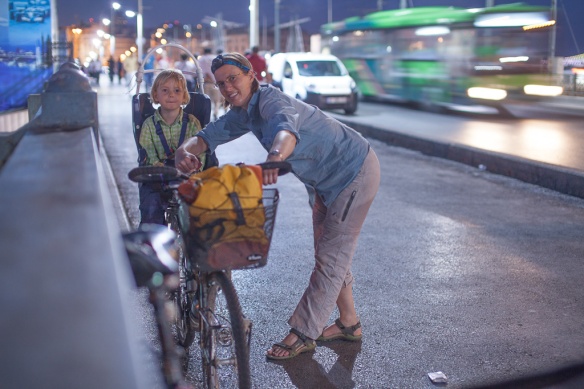 On the Galata Bridge in Istanbul

4 thoughts on “Istanbul and Gallipoli”